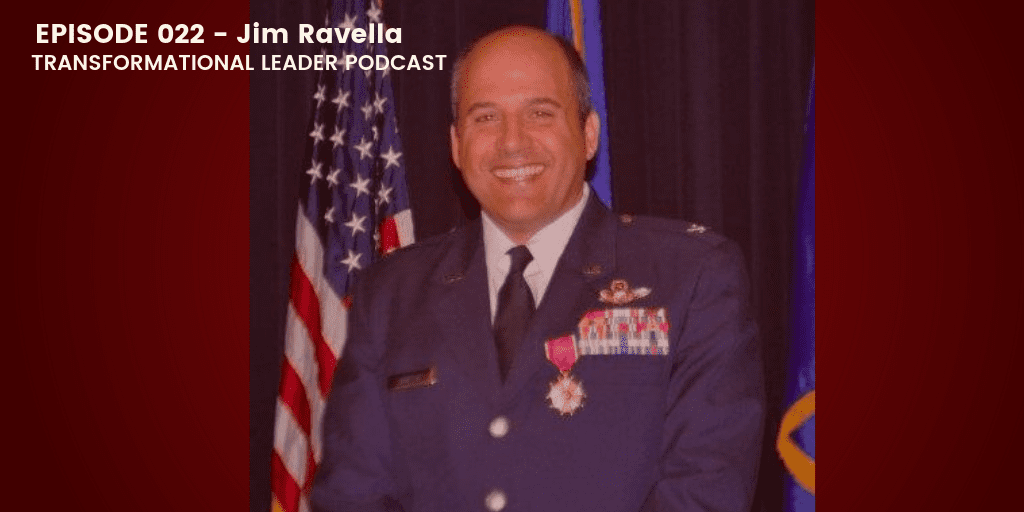 On this week’s episode, we had the chance to sit down with James (Jim) Ravella. Father to seven children, writer and speaker, and served over 26 years in the USAF as an F-15E pilot. Jim shares his personal story that is touching and yet relatable, real life scenarios and challenges that people go through every day. Jim was married to his first wife Andrew, whom the family lost to a four-year battle with breast cancer in 2007. During the fight Jim shared his story through a blog, Journey to Healing, that touched many lives around the world and became an inspiration to all who knew them.

Jim shares how his first leadership position was the Director of Operations, which to him was the perfect job. However, at that time his wife was diagnosed with cancer as he accepted the position. Priorities changed and he realized taking care of his wife was his main priority and he shared with his team how he needed them to step-up as he wouldn’t be as hands on, but rather giving direction and authority and trusting his team to get the job done.

Throughout the interview Jim gets into deep conversation about his leadership journey, how his personal life guided him as a leader and what leadership personally means to him and how he helps guide others. “You’ll never be a great leader until you learn to follow.” This is one episode you DO NOT want to miss!

This episode is brought to you by the John Maxwell Team.

Learn how the John Maxwell Team Leadership, Coaching, Speaking, and Training Development Program can help you take your organization, leadership, and life to the next level.

Book a free call with a Program Coordinator at: johnmaxwellteam.com/talk