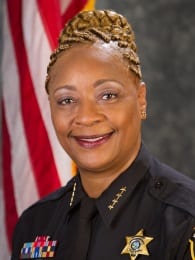 Cornita Riley is the first female Chief of Orange County Corrections Department (OCCD). OCCD is the 5th largest jail in Florida and the 19th largest in the nation. Chief Riley is responsible for more than 1,800 corrections officers and staff, 3,100 inmates, and more than 6,000 participants in community corrections programs. The jail’s operating budget is $155 million. After her appointment in October 2013, Riley implemented an 18-month strategic plan that focused on public safety and outcome measures, including superior jail, probation, program management, and operations.

Chief Riley’s career with the criminal justice system began at the Florida Department of Corrections in 1981 as a probation and parole officer after graduating from Florida State University with her bachelor’s in rehabilitation counseling. While at the state, she held the position of assistant superintendent and then regional assistant warden. In 1999, she joined Orange County Corrections as Manager of Special Facilities and the Inmate Services Division. Rising through the ranks, she was later named Deputy Chief of Operational Services, where she served for five years prior to her appointment as the Chief of Corrections. Later in her career, she was invited to participate in an inaugural Masters-level Program and earned a Masters in Public Administration (MPA) from the University of Central Florida.

Chief Riley is leading Corrections through a culture of change, and her inspirational leadership is a testament to her commitment to public safety and the community that she serves.